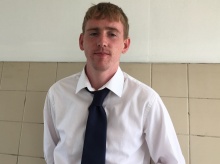 A young man from Leeds has made a heart-felt film showing the ways that dyspraxia affected him at secondary school, so that others can better understand the condition.

Joe Ruane was only diagnosed with the developmental disorder – which affects coordination and movement – when he was 15.

Now 23, he confides how it seriously affected parts of school life such as PE lessons, taking down notes in class and carrying out presentations.

‘I wanted to raise awareness of dyspraxia, but because it’s such a broad condition I felt I needed to narrow it down. Looking back through my life I realised it had affected me the most at school, so my film focuses on that.

‘Keeping up in class could be a struggle for me. When I needed to copy down notes I felt like everyone else was light years ahead of me. I was scared to ask the teacher for help in case it made me look stupid in front of the class.

‘I wasn't very good at PE and struggled getting ready for those lessons - things like getting dressed and tying my shoelaces can take forever.

'I needed more help with my exams and coursework – I was given extended deadlines and extra time during my GCSE exams.’

Joe hopes that his project will educate people on the realities of living with dyspraxia.

‘I can come across as clumsy to people who don’t know about the condition,’ he says.

‘Quite often when I tell people about it, they get it confused with dyslexia and then ask me to give them a summary of what dyspraxia is, which I find difficult because it can affect so many different areas.'

Joe, who now works as an office manager, wants to point out that despite the difficulties he faces there are good elements to the condition too.

‘My dyspraxia has helped me think outside the box in certain situations and I’m pretty good with computers and technology, which helps me in my current job,' he says.

'I hope that teachers will see it so they can help students who have symtpoms of dyspraxia and I hope the film will help young people with the condition as well,' he says.

‘I know that myself and many other people with dyspraxia can excel in life with just a little help and accommodation.'