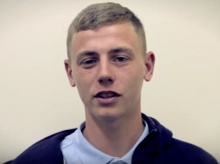 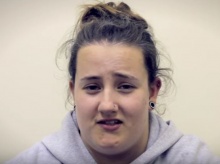 A still from the film posed by actor 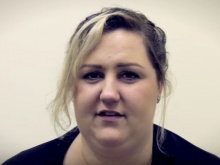 A group of young people from Newcastle want to show that sexual exploitation can happen to anyone - regardless of age, gender or sexuality.

With Fixers, they have created a film which covers three different scenarios of unhealthy relationships.

It shows a girl being exploited by an older boyfriend, a boy being groomed by an older woman, and a teenager whose girlfriend is threatening to put naked photographs of her online.

Group member Lily, 24, whose real name has not been used, says:  ‘We wanted the film to show different ways that sexual exploitation can happen.

‘We want the film to challenge the stereotypes of sexual exploitation. People often assume that it’s older men exploiting young girls, but that’s not always the case. It can happen to anyone.

‘We wanted to show that someone of a similar age is still capable of sexually exploiting you and that boys can be victims of sexual exploitation too.

‘People sometimes assume that boys can handle themselves, so if an older woman is exploiting a young boy they might not take it seriously. His friends might think what’s happening is ‘cool’, but it’s not.’

The stories in the film are told from the perspectives of friends of people who are being sexually exploited.

Lily says: ‘If the exploitation is happening to you, then you won’t necessarily realise it, but you do notice when something is wrong with your friend.

‘Quite often your friends are the people that you tell everything to – you can confide in them about things you wouldn’t necessarily tell your parents.

‘We hope that the film will help people who are being exploited, but also encourage friends who have noticed this to report it to the appropriate adult.’

The group plans to share the film in schools.