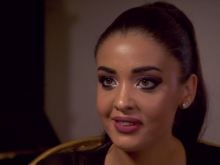 Charlene is encouraging parents to talk about their experiences 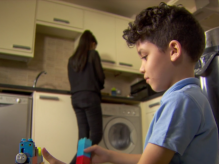 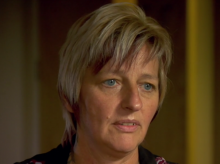 Karen Hoe from Contact a Family supports the campaign

‘What I love about Joshua is his smile - he’s just such a character and he’s special in so many ways. Joshua’s also autistic. I used to live on literally an hour or two of sleep. I felt like it was very difficult for me to cope - everything was collapsing around me.’

Charlene Woracker tells how she struggled to bring up her son who has autism.

She is calling on parents of children with special needs to share their experiences so that they can help each other feel less isolated.

With Fixers she has made a short film which was broadcast on ITV News Calendar.

The 25-year-old, from Sheffield, had her first son Leyton at 18 followed by Joshua two years later.

She says:  ‘I’m a single mum. I think just being a mum in general is challenging, so having a child with additional needs just makes it even harder.

‘When Joshua was diagnosed, all I got was a leaflet about the condition.  I didn’t know where to turn for support, and I often felt very isolated trying to deal with it.

‘I feel it’s really important for other parents who are going through a similar situation to share their stories because it gives you a sense of normality.

‘It makes you feel so much better to know that there are other people out there who are going through the same things.’

Emily Morgan describes the emotional toll of looking after her autistic son.

She says:  ‘I don’t think people really understand what you go through day to day. Sometimes I just want to cry. I’ve no idea who I’m supposed to turn to.’

Harriet Blake, who has two disabled children, says:  ‘I can’t go on holiday, I can’t do lots of things. It’s a lot more complex when you’ve got children with disabilities.’

Tina Medlock agrees that being able to support and be supported by other parents is important.

She says: ‘It took me a long time to hold my hand up and say I’m not super mum and I do need some help.

'Seeing other parents going through it and succeeding gives me hope.'

Karen Hoe, a parent adviser for Contact A Family, a charity which helps families of children with disabilities, supports Charlene’s campaign.

She says: ‘Our research shows that over 70 percent of parents of children with special needs and disabilities feel isolated.

‘They’re feeling anxious and lonely and scared and don’t know where to turn once they’ve had a diagnosis.

‘It’s invaluable to hear other people’s stories and to help share experiences because it makes you feel that you’re not on your own - that you’ve actually got someone who can help listen and support you and understand what you’re going through on a daily basis.’

Charlene's project is supported by the Wellcome Trust.