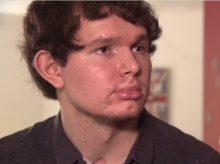 Howard Wicks has locked-in syndrome, a condition which means all of his muscles are paralysed 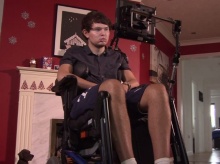 Howard communicates by typing into a computer, which then relays the message vocally 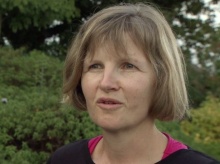 ‘When I got out of the shower I felt fine until I took a few steps and then bam! I was swaying from side to side, gradually falling to my bedroom floor, my head resting between my broken drawers.

‘So I was naked, freezing, shaking in pain, just hoping someone would find me.’

Howard Wicks from Kingsbridge in Devon had suffered a serious stroke.

It left him with locked-in syndrome, a condition which means all of Howard’s muscles are paralysed, leaving him unable to speak or move, despite his brain functioning normally.

Now 21, Howard needs round-the-clock support and can only communicate by typing into a computer which then relays the message vocally.

Despite the enormous adversity Howard faces, he is determined to overcome his condition and regain speech and movement.

Fixers is helping Howard to get across his message that it’s important to remain positive whatever life throws at you.

His story was told on ITV West and ITV West Country.

He says: ‘My hopes for the future change all the time. I have always said to myself I want a family, pets, my own house - and I hope I can support myself.

‘I have tried very hard to have an optimistic attitude throughout this experience.

‘I believe that I can return, and as a much better person too.

‘My message is, keep positive and you can overcome absolutely anything.’

Dr Hilary Gunn, lecturer in neurological physiotherapy at Plymouth University, explains that it is important for people to stay optimistic.

She says: ‘We have a lot of evidence which tells us how important it is for people to have a positive outlook, to have goals and aims and keep motivated, despite the problems that they face.’

Howard's film was launched at Truro and Penwith College, at an event attended by around 50 students.

One student, April Talbot, said: 'It was a very inspirational video and gave another perspective on life. Howard's positive mindset was brilliant.'