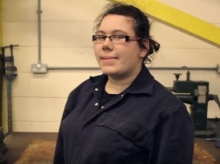 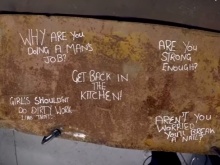 Zara receives negative comments when she talks about her job 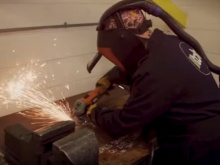 The teenager says she loves her work

A teenager who trained as a welder has created a film with Fixers to challenge gender stereotypes.

During the time of the traineeship, Zara Parkin, 19, says she was told that she was ‘doing a man’s job’.

The teenager, who lives in Gateshead, Newcastle, says: ‘Because I was a female in a male-dominated environment, people would say things to me like ‘get back in the kitchen’ or ‘aren’t you scared you might break a nail?’

‘It needs to stop.  Why should it matter if I’m male or female?’

She says: 'It felt like that was what everyone expected of me. It's thought of as more of a 'girl's job'. I went along with it, but four months in knew it wasn't for me.

'I studied GCSE electronics when I was at school and loved it, so I started looking at other courses that would let me build on those skills.'

Zara wants people to understand that women are just as capable of doing the job as men are.

She says: 'Women should be able to excel in their careers in the same way men can.

‘Most of the women in my company work in the office, in areas like human resources.

'None of the head supervisors are female – all of them are men. Out of about 600 people who work on the shop floor, there are two women.

‘Men can apply for top jobs and people will just assume they can do it, but I think women are questioned a lot more during the interview process.

'We’ll be asked things like – ‘why do you think you’re strong enough to do this job’. But why should women have to prove that if men don’t? We’re all human and we should be treated equally.’

Zara, who hopes to share her film in schools, adds: ‘I want to show young people that if they have a career in mind they should go for it and not let stereotypes stop them.'