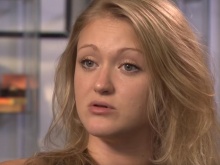 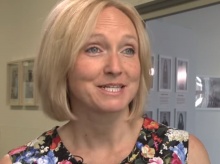 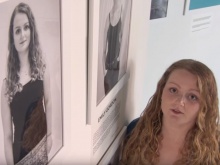 Lindsey Shorter features in the exhibition

‘I get extreme pain, that’s probably the main thing that people don’t realise. Serious symptoms are not always visible.’

A young woman who suffers from chronic pain due to a number of invisible medical conditions wants to encourage people to be more understanding of hidden illnesses.

Milly Banks has been diagnosed with compartment syndrome, fibromyalgia, ME, functional neurological disorder and endometriosis.

She suffers from chronic migraines and headaches, but says people fail to sympathise with her because they cannot see what is causing her pain.

Her story will be broadcast on ITV News West on Wednesday, November 11, between 6:00 and 6:30pm. Previously it appeared on ITV News Central.

The 23-year-old, from Cheltenham, Gloucestershire, says:  'The negative reactions I’ve had from people are varied but generally it comes from a lack of understanding.

‘Some people choose to judge and almost make you feel bad for being unwell.

'My message to people who don’t understand invisible illnesses is to be open-minded and listen.

‘I want people to be treated the same as people with something visible, like a broken arm or a cut.

‘You are bleeding on the inside and people need to understand that and give that some credit.’

Dr Sharon Harper, from the University of Gloucestershire, says: 'I think Millie's exhibition works well. When we look at an image we make certain judgements to begin with.

'As you read the story that accompanies the image you look at it again and elements of the image - such as body language, the smile, the clothing and the context - start to change because we have new information that can feed into our understanding of the person.'