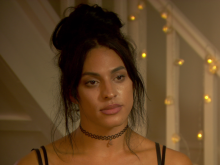 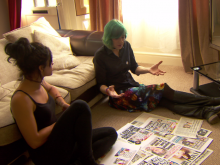 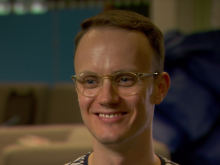 ‘At the age of 25, I realised that I was transgender. Did I like it? No. Did I want to be transgender? No. If I could have woken up the next morning and just been a “normal” person, I would have, because I couldn’t cope with these feelings inside my head.’

Cal Lunt tells of the moment she realised she was transgender and the confusion that followed.

Everything that she had read about gender identity was based on articles in the press, which she claims are fixated on appearances.

Now she’s working with Fixers to combat stereotypes, and with help from the charity, she has made a film which was broadcast on ITV Granada News.

The 26-year-old says: ‘What I’d seen in the press and on social media of how a transgender person should be and should look - I still wasn’t fitting in to that role.

‘It made me feel sad, low, worthless and constantly alone.

‘The media portrays an external side of trans issues – how people look and how people dress.

‘I want everyone to know that trans people are the same as everyone else – being transgender is only a tiny part of my life.’

As part of her project, Cal, from Liverpool, is going into schools and colleges to demystify some of the issues.

One student asks if she’s feeling happier about herself now.

Cal answers:  ‘Right now I’m probably the happiest I’ve ever been. I’m so content with life, with accepting myself and accepting if someone’s got a problem with me, that it’s not my problem.

‘If hope I can impact people with my story and just make that little difference in society by giving people the opportunity to express who they are, without living in fear.’

Aside from her broadcast, Cal has created a film with Fixers, which encourages people who are transgender to be proud of who they are.

Watch the film 'A Letter From a Girl to a Boy' by clicking below.

He says: ‘I think the media has only touched the surface when it comes to trans experiences and is still very much about binary identities and aesthetics.

‘I think it’s important to actually talk about being trans and to demystify some of the sensational things that are in the media because it allows us to learn from one another and really get to know someone as a person.’

Cal met with Ashleigh Talbot, who also campaigns on trans issues, to examine some of the media coverage and discuss what needs to change.

Ashleigh describes the impact that media stories had on her own journey of transitioning to become a woman.

She says: ‘It made me scared to come out so I just buried it and tried to get on with it because I knew that to transition would be to open myself up to ridicule.

‘What’s needed is empathy. Let’s have some accurate representations instead of this objectifying, sensationalising nonsense.

‘As long as these stereotypes in the media continue, all the people who are not transgender are going to be thinking “well trans people are all like this” because all they really know about it has been informed by this type of coverage.’

Cal's project was supported by the Wellcome Trust.