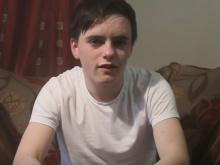 Aaron Kinney started smoking cannabis when he was 12 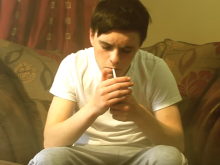 Aaron shares his experiences in the Fixers film

A teenager who started smoking cannabis at the age of 12 is warning others not to use drugs as a coping mechanism.

Aaron Kinney was left feeling too paranoid to leave his house after smoking 15 joints a day.

But after kicking the habit, the 16-year-old has made a film with Fixers to show the effects the drug had on his life.

Aaron, who lives in Ballymena, Northern Ireland, had been using cannabis recreationally until a personal tragedy saw him smoking more.

He says: ‘My uncle died and I couldn’t cope. He was taking heroin and it killed him. We were really close and I was devastated.

‘Because I was so young I didn’t know about his addiction. I only found out a few years later when I started asking questions. It was hard to deal with.

‘I missed him and couldn’t seem to talk to anyone so I smoked to make myself happy. As I got older my depression got worse, so I smoked more.’

Aaron found himself using larger amounts to get the same high.

He says: ‘It got to a point where I would be smoking 15 joints every day around the age of 15. I felt my mind slipping away from me.

‘I never wanted to go out, because I was feeling so anxious and paranoid all the time. I just wanted to stay in and smoke and I would spend weeks at a time indoors.

‘All my money was going to buy smoke so I never had any cash, but the cycle meant I needed to find some to buy more weed and that sometimes meant taking my mum’s money and doing other things I’m not proud of.

‘I fell out with my family because of the things I was doing and I was failing at school.’

The turning point came when the police got involved when he was 15.

‘They got me help from a doctor. I was referred for counselling and able to use a self-help service for my drug addiction.’

Since quitting cannabis, he has noticed positive changes and will be starting a hairdressing course at college in September next year.

‘I’m a lot happier now. I’ve got new friends now who don’t smoke or do drugs, and I’m dealing with my issues.’

Aaron's film was launched at Rainey Endowed School in Magherafelt, at an event attended by 140 students.

Megan Law attended the screening and said: 'The film is very hard-hitting as it's such a big issue for many people my age. Most people just think it's a bit of harmless fun at the start but, as the film shows, it can have serious consequences.'

AnnaRose McElroy added: 'This is a very relatable film. It gets people thinking about how easy it could be to get sucked into a downward spiral of health and behaviour.'