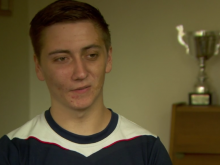 Nat Pattinson wants to show the benefits of disabled sport 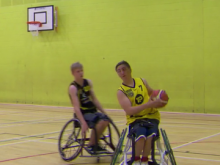 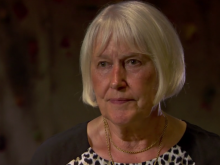 'When I was at school I couldn’t take part in PE, so I could never have imagined myself ever becoming who I am today – a wheelchair basketball player for Great Britain. You can change your life if you take part in sport.'

Having struggled to come to terms with his own disability in childhood, Nat Pattinson is urging more people to explore the opportunities and benefits of disabled sport.

With Fixers he has made a film which was broadcast on ITV News Border on September 13.

He was diagnosed with a rare bone condition at the age of seven, which led to him becoming confined to a wheelchair.

Now 20, Nat speaks of the depression that followed.

‘I was quite depressed for a lot of years, it was quite difficult to fit in and it was hard.’

He says: ‘Not only have I made friends, I’ve been given an opportunity now to coach other people with disabilities in Cumbria.

‘I think a lot of people with disabilities don’t recognise the fact that they have the ability to take part in sports – they just reject in straight away.

‘I’d love for people who are stuck in the same situation I was to be given the chance that I’ve been given and succeed in something they enjoy.’

Nat’s teammate Danny Ewin was just the sort of person Nat is trying to reach with his message.

Danny was left paralysed from the chest down by a motorbike accident at the age of 16.

At first he didn’t want to get involved with disability sport.

He says: ‘I didn’t really think I had a future back then - I had people coming up and asking me if I wanted to try wheelchair basketball.

identify as disabled. Eventually my mum made me go, and I’ve loved it ever since.’

She says: ‘For people who’ve acquired a disability they may not want to take part in sport and they may have a negative attitude to themselves.

‘One of the most important things about sport is actually getting out of the house, meeting with other people, having fun, being fit and making friends.’

Nat's film was launched at an event held at Northumberland College.

One audience member said: 'I think the film shows that even if you've had hard times or something life-changing has happened to you, it shouldn't stop you from giving things a go.'