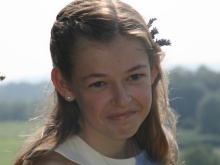 Lara wants people with speech needs to be entitled to interpreters 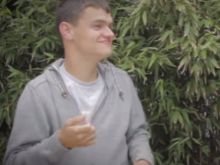 Lara appears in the film

Two teenagers with speech disorders who are forced to take their parents to doctor appointments to help communicate, are calling for interpreters to attend GP surgeries.

Lara Goring and Eddie Osborne, both 18, need their parents to attend healthcare appointments– which can be embarrassing if they are discussing personal issues.

With Fixers the pair from Hellingly, East Sussex, have made a film showing the ways that people with speech and language disorders struggle to communicate in a medical environment.

The pair, who attended St Mary's School in Bexhill together - hope the film will be watched by people in the medical profession and education sector.

Unlike deaf people, patients with speech, language or communication needs are not entitled to an interpreter.

They can apply in advance for an interpreter to attend, but must give plenty of notice.

Lara says: ‘If there is an emergency you can’t get a speech and language interpreter to come in instantly, so it would help to already have those rights there.’

Lara, who can talk but finds signing more comfortable, was born with a rare disorder called Cat Eye Syndrome, which affects various organs in the body as well as speech.

‘I find it difficult to process things and I don’t know what to say or how to say it, so I just stay quiet.

‘To make things worse,  if you’re a teenager and you’ve got private issues, having your mum as your interpreter can be really embarrassing.’

Lara hopes the film will demonstrate the need for interpreters in healthcare environments and encourage more people to learn sign language.

She says: ‘I think sign language should be taught in schools.

‘If you can make it more universal it will open the world up to people with difficulties.’

Lara appears in the film alongside her friend Eddie who was born with Joubert’s syndrome - a disorder which affects the brain and causes varying degrees of physical and mental impairments.

He says: ‘I communicate using an app, but it takes a long time to write things down and show people.'

Lara adds: ‘Eddie can type into it and it can speak for him but they don’t always work properly.

‘If you make a spelling mistake it doesn’t self-correct it and it just speaks it out loud.

‘Apps can’t express emotions and explain the nuances of things. You can make somebody understand you’ve got a pain in your arm but that doesn’t exactly describe how it feels - you can’t describe that it’s a burning pain or where it’s located.’