When Grandparents Raise You 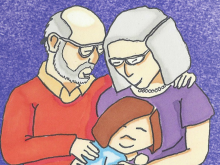 Amelia was brought up by her grandparents 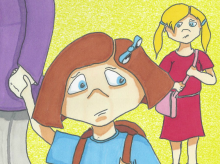 A teenager who was taken in by her grandparents after she endured years of emotional abuse at home is raising awareness about ‘kinship care’.

With Fixers, 17-year-old Amelia, whose real name has not been used, has created a story book describing her journey.

She says: ‘Growing up, other kids would wonder why my ‘parents’ were so old.

‘No-one knew much about ‘kin kids’ and I still find that to be the case today.

‘I hope my story book will give young people more understanding about kinship care and how much of a lifeline it can be.’

Amelia, from Liverpool, says she spent most of her childhood living in fear until she moved in with her grandparents three years ago.

She says: ‘Growing up was a very scary time. You’re supposed to feel safe in your own house, but I didn’t. It was emotional torture at times.

'Eventually the authorities got involved and I was thankfully placed in the care of my grandparents.

‘It was like a fresh start for me and an opportunity to make a new life.’

Amelia, who is currently studying at college, plans to make her resource available in schools, youth centres and libraries.

She says: ‘Because it’s a subject not a lot of individuals know much about, it’s important we reach as many people as possible.

‘Kinship care does work and I would like to say a big thank you to my grandparents for being there for me. If it wasn’t for them, my life wouldn’t be what it is now.’