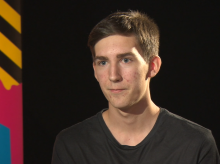 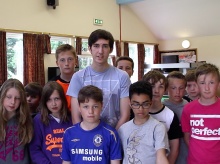 Ross with children from the club 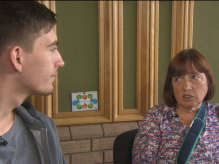 Ross talks to Cllr Avril York about the cuts

‘At my local youth club I learned how to cook, babysit, and mentor younger kids. I’m gutted that it’s closing; young people won’t have the same chances that I had.’

A teenager who is saddened by the closure of his local youth club has launched a campaign with Fixers to show the impact service cuts could have on children in the area.

Ross Williams, 17, was shocked when he heard that Builth Wells Youth Club in Powys would be closing.

The cuts were part of a budget passed by Powys County Council in March, and the club was closed four months later.

Ross, who has attended the club since he was 11,  says: ‘I was really sad that it came to an end, and the other children were pretty upset because they’ve got nowhere to go now.’

His story was broadcast on ITV Wales on August 11.

Ross, who studies uniformed public services at Newtown College, says that the club has helped him to build vital skills.

He says: ‘The biggest thing I gained was confidence; when I first started I was really shy.

‘Going there and talking to people I’d never spoken to before helped me and I made loads of friends - I came out of my shell.

‘I did so many projects there – things like cooking, babysitting, and peer mentoring.

‘I got qualifications from taking part in projects that all these young people won’t be able to do now.'

Ross is worried that the closure will have a negative impact on young people in the town.

He says: ‘Seeing as they’ve now got nothing to do, they might start smoking and getting into trouble.

‘There are some bad people around and they might get in with the wrong crowd and think that it’s cool.

‘I’m sorry that these kids won’t get the same opportunities I had.’

Cllr Avril York, from Powys County Council, explained why the cuts were made.

She says: ‘It’s because there just isn’t enough money to go around Ross.

‘There are huge challenges with adult social care and education and because we receive less money from Welsh Government that means all other services have to take cuts.’

Ross adds: 'I hope that this film will encourage Powys County Council to see the benefits that youth clubs bring to the community and try to keep them going.

'I’m so grateful for all of the experiences I’ve gained; these younger people won’t experience that if there’s no youth club left.'