Leap: From School to College 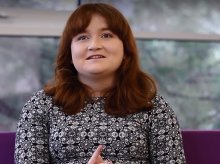 Rosie explains some of the anxieties she had when starting college 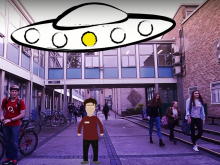 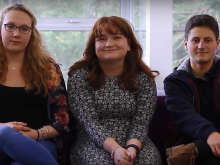 The group want teens to know there is support available

The transition for any student from school to college can be a challenging one.

So a group of teenagers from Huish College in Taunton, Somerset, have created a film with Fixers to reassure youngsters going on to further education this September.

They found that 56 per cent of 100 students surveyed at the college admitted to feeling anxious about the transition.

Rosie-Anne Wright explained she found the change difficult and struggled to make friends.

She says:  ‘It was really scary. I was already anxious so the fact that I hardly knew anyone made things worse.

‘I remember one time, my best friend went on a trip as part of her course and I was just walking around on my own.

‘I had nobody to sit next to in the canteen and was too frightened to introduce myself.’

Rosie and her team now want to show those in similar situations that support is available.

Rosie plans to show the film in schools to prepare pupils from taking the leap.

She says: ‘It might just help young people to feel more relaxed about things.

‘Hopefully it will show others that they’re not the only ones going through this.

‘Seeing a film like this a year ago would have better prepared me for the changes that come with college life,  and shown me that everyone’s in the same boat.’