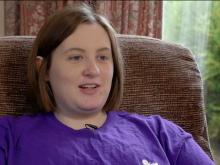 Janette Connor, 26, talks about what life is like with Crohn's disease 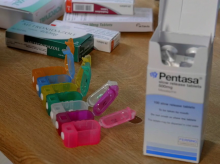 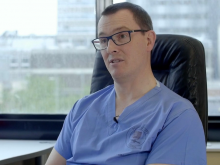 ‘They told me 7 out of 10 people would require surgery in first two years and I just left thinking “yeah sure, that’s just a statistic”. But a week later I was in hospital seeing a surgeon.’

Janette Connor has Crohn’s disease, a long-term condition which causes inflammation of the lining of the digestive system, resulting in fatugue and abdominal pain.

In the past year alone, the 26-year-old has spent 100 days in hospital battling the condition.

Janette says many people don’t understand what Crohn’s is, so she is campaigning with Fixers to raise awareness about the debilitating disease.

She told UTV Live about her campaign on Sunday, August 21.

Janette, from Londonderry, Northern Ireland, says:  ‘More and more young people are being diagnosed with Crohn’s, but it’s still a disease that people don’t know really know a lot about.

‘Some people thought I had a stomach bug or that I had IBS or I had something that could be contagious.

Janette, who is a family support worker, says Crohn’s has changed her life, but it hasn’t all been bad.

'I’ve a spent a lot of time in hospital but I’ve also held down a job and I’ve realised just how good my friends and family are,' she says.

‘Work has been one of my safe places.  It’s offered continuity when everything else has gone crazy.’

Janette recently started a new job, and worries how she will explain her condition, which sees her taking 30 tablets a day, to colleagues.

She says: ‘I’m about to move to a new job but it’s a real fear that I'm going to have to explain Crohn’s all over again.’

Janette has made a short film with Fixers explaining how Crohn’s disease has impacted her life. She hopes it will educate people about the condition.

Watch the film ‘Game of Crohn’s’ by clicking below.

He says: ‘If you imagine having severe gastroenteritis, and feeling very sick and not absorbing any nutrients and not sleeping, you can imagine how awful you’ll feel - that’s what it’s like for patients who have Crohn’s disease who have a flare.

‘But sometimes the symptoms are very manageable and patients are able to get on with normal day to day life.’