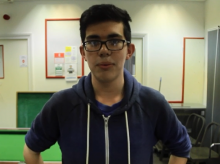 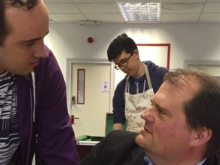 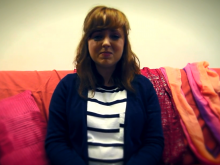 A teenager hoping to follow in his father’s footsteps by joining the Royal Navy, wants people to have more respect for army veterans.

Sixteen-year-old Thomas Smythe from Witham in Essex is encouraging his peers to put aside their personal opinions of the armed forces and appreciate the sacrifice many make in the line of duty.

‘My dad was a marine engineer for more than 20 years and is a great role model,’ he explains.

‘Listening to his stories has really inspired me to pursue a career in the Navy, but it saddens me the way some people talk about our service men and women.

‘I’ve heard people refer to them as murderers, which is really upsetting.

‘These people go through a lot and many return from tour mentally and physically scarred by their experiences.

‘I’m not trying to change people’s opinions, but the least everyone should do is be respectful of others.’

Thomas has helped to create a film with Fixers to shed some light on the issue.

The fictional piece shows a young woman’s vlog post in which her dad, who has just returned from duty, is verbally abused by a young person.

Watch the film at the top of this page:

‘It’s a really strong film,’ he adds. ‘I wanted to show just how hurtful people’s words can be.

‘If I heard someone talking about my dad in that way, I would be very upset.

‘My view is that no matter what your opinions are, if you don’t have anything nice to say then don’t say it.’

Thomas, who hopes to become an air technician after his Royal Navy training, which begins in November, plans to take his film into local schools and share it on social media.

‘I was delighted when I got my place and I really hope to do my dad proud,' he says.

‘I mainly want to target the younger generation with my Fixers film so they become accepting of others.

‘Although my project is about army veterans, I hope it can encourage respect between people on a wider scale.

‘It’s about getting along with others regardless of our differences.’