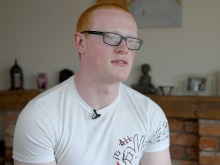 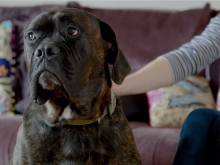 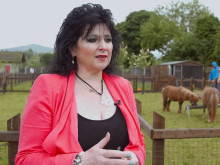 ‘After we got a dog, I noticed that my mum, who is ill, was more at ease especially when she was stroking him.’

Cathal Burke wants to raise awareness about the health benefits of pets after seeing the impact his bullmastiff Bubba has had on his mum, who has been sick for 15 years.

His story was broadcast on UTV Live on Sunday, July 17.

The 21-year-old, From Banbridge, Northern Ireland, says:  ‘My mum suffers from fibromyalgia, arthritis, chronic back pain and mental issues.

‘She gets brain fog and her thoughts become jumbled and quite difficult to comprehend.

‘But you can see that whenever she starts stroking Bubba, it helps to focus her mind a bit.’

Noreen McComiskey, learning disability specialist services manager at the Southern Trust, says that she has seen the positive effects dogs have on people.

She says: ‘I definitely believe that animals are a therapy and the people with a learning disability get so much out of it.

‘The animals provide that comfort, that friend that they can talk to who doesn’t talk back, who understands, who shows empathy by licking the hand, allowing them to stroke.

‘It’s a very special bond between a human and an animal.’

Cathal adds: ‘I’ve seen my dog help my mother who suffers from physical and mental disabilities and it’s spurred me forward to try to promote this story.

‘We hope to raise awareness about animals being used in therapy; they can be so much more than a family pet’.