Say No To Knives 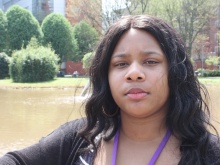 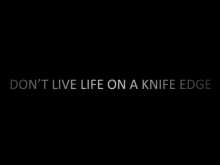 Now she is urging others not to carry knives

A woman who lost her childhood friend when he was stabbed to death has made a film with Fixers urging others not to get involved with knife crime.

Naomi Ebanks was 19 when her friend of five years, who she does not wish to name, was killed in an unprovoked attack in Harlesden, London, where the pair spent their teenager years together.

The teenager was fatally wounded in June 2014. The gang responsible were sentenced to life for the murder in April last year. The court heard that the 18 year-old man had been stabbed for no reason.

Naomi, now 21, says: ‘I received a text in the middle of the night on July 1 saying that my friend was dead.

‘My heart sank, I couldn’t believe it; he had never been involved with gangs.

‘I couldn’t believe he’d been taken from me so suddenly and I was sorry that I’d never told him how much I loved him. He was like family to me.

‘One time he saw my mum struggling with her shopping and helped her home.

‘Sometimes I imagine him walking back through the door with bags of groceries, but I know that he never will.’

The teenager, who was the son of a local church leader, was studying plumbing and dreamed of running his own business.

Naomi says: ‘He loved getting involved with the church and playing his musical instruments during his dad’s service.

‘He was also very much into sport and a keen football player.

‘It just goes to show that you don’t always have to do something wrong to get stabbed.’

Naomi, who is studying sociology at a university in Birmingham, explains that her friend’s death motivated her to take action.

She says: ‘When he died I was deeply hurt. He was such a caring, giving person – he didn’t deserve to die.

‘I wrote the words to the film shortly after the anniversary of his death. I imagined him lying there on the cold pavement, completely helpless, and was inspired to do something.

‘I made the film to deter others from carrying knives and getting involved with gangs.

‘That’s why the film is told through the eyes of the victim – I want people to think ‘how would I feel if that was me.’