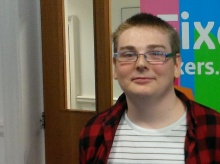 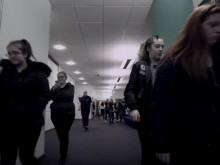 A young man who suffers from a condition which affects his coordination has told how he is frequently mistaken for being drunk.

Allan Rewcastle, from Paisley, Renfrewshire, has dyspraxia, a developmental coordination disorder which means he struggles with balance, concentration and short-term memory loss.

He says: ‘People ask “why are you walking funny, why can’t you walk in a straight line?” or say things like, “oh, someone’s started drinking early!”

With Fixers, Allan has created a short film to tackle people’s misconceptions. Go to the top of this page to watch the film.

The 19-year-old says: ‘I hope that by watching my film people will have a better understanding of the limitations dyspraxia can place on individuals so there’s greater understanding and tolerance.’

Allan, who plans to show the film in schools, also wants his peers to be more understanding.

He says: ‘As a result of my condition, I’ve never been any good at sports. In school, I was always the last one to get picked, which is frustrating.

‘I loved playing football with my friends but I was no good at it. Everyone would laugh and snigger at me, so I stopped doing it.

‘Even everyday tasks like tying shoes laces, buttoning up a shirt can be challenging.’

The film, which is set in a school corridor, highlights Allan’s struggle.

He says: ‘School corridors were particularly difficult for me to negotiate because I could trip and fall.

‘The bell would ring and everyone would be rushing about. I was nervous and wanted to take my time but other pupils would be impatient and push past me.’

He says: ‘My short-term memory is poor and I can only remember the things I really love, rather than what I’d learned the day before in class.

‘Having more than one exam in a day would be stressful for me. Just getting to one exam and being organised ahead of it involved significant effort for me.

‘The pressure to get things right meant I rushed and made mistakes in important tests.’

Despite the obstacles Allan faces he is determined not to let dyspraxia get the better of him and hopes to pursue a teaching career so he can help other young children.

He says: ‘At my lowest point dyspraxia made me feel useless. I believed I was destined to have terrible job prospects and that I’d never be able to fulfil my dreams.

‘But I’ve learnt not to let dyspraxia affect my daily life and when I accomplish something I feel good about myself.’