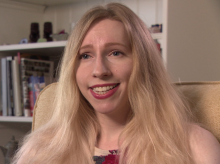 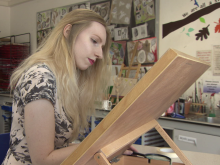 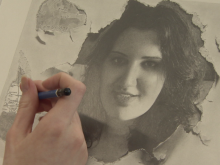 A portrait of an EDS sufferer by Claire

'Lots of young people are living with medical conditions that people can’t necessarily see, like diabetes or joint problems or chronic fatigue.’

Claire Anscomb has Ehlers-Danlos syndrome (EDS), a genetic condition which means her body tissue is not strong enough to hold her limbs in place.

The 23-year-old tells ITV that because the condition isn’t visible, few people understand or empathise with her.

Claire wants to get people talking about hidden illnesses and has used her artistic talents to create a series of portraits of fellow sufferers.

She says: 'My Fixers project is about highlighting how common it is to have an invisible illness and to encourage public understanding of conditions you may not necessarily be able to see on the outside.

'For the project I created portraits to show fellow sufferers as these very strong, positive people, even though they're still dealing with these illnesses that make them more fragile than others.'

Claire, who is from Crawley, exhibited the portraits in the Mall Galleries in London to raise awareness that there are lots of young people who may not appear obviously disabled, but are living with debilitating conditions.

Claire says that because illnesses like EDS are not visible, people doubt that she is unwell.

She says: `We can look perfectly healthy on the outside but some people might think that we’re faking this or that we’re just being lazy.’

Claire hopes the art exhibition will make people stop and think before making a judgement.

She says: 'Just because you can’t see it doesn’t mean it doesn’t exist; these people should be treated with dignity and sympathy.’

‘Not being believed is a huge challenge. People get doubted that there’s anything wrong with them, you know people may just need to use a wheelchair occasionally, they just may not be believed’.