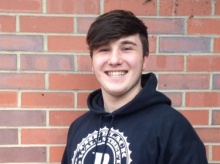 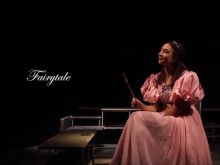 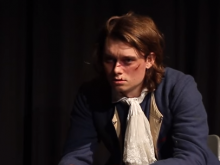 An actor plays the part of a victim of domestic abuse

Victims of domestic abuse are frequently stereotyped as female, but a teenager from Wales is challenging this myth in a thought-provoking film made with Fixers.

Alex Lavric from Newport says men can be victims too, but they are less likely to speak out about it.

The 18-year-old, who led a team of young people who contributed to the film, says: ‘Men are ashamed about being victims of domestic abuse. It’s a problem that’s taboo and pushed under the carpet.

‘It’s important more information is available about domestic abuse against men because people tend to look past it or ignore it.’

Alex believes young people are particularly at risk and is keen to share his film in schools.

He says: ‘Young people getting into relationships for the first time are especially vulnerable.

‘That’s why I’m hoping to reach young people so that, going forward, they will be able to spot  signs of abuse and get help.’

In the film a fairy-tale princess describes her prince charming, but all is not what it seems.

Alex explains: ‘The princess talks about her relationship with her prince. Initially you assume she is a victim but it’s quickly revealed that it’s the prince who is the victim.

‘The princess is controlling her prince through emotional manipulation, threatening behaviour and physical abuse.

‘Sometimes there can be a dark or hidden side to relationships and that’s what I wanted to show. I wanted to question the myth men can’t be victims.  Relationships aren’t straightforward or a fairytale.

‘People are scared of abusers and often stay quiet so I hope my film will encourage victims not to feel ashamed or embarrassed and to speak out instead.’