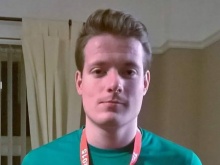 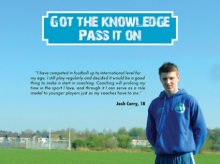 Connor has produced a series of posters with Fixers

An Ulster athletics champ who turned to coaching when an injury forced him to take a break from sports is showing other young athletes that teaching is just as rewarding as taking part.

Connor Lunnun from Ballymena had previously taken two first-place titles for the long jump in Ulster’s indoor athletics championships, but was forced to take a break from competing after a rugby injury left him with a slipped disk in his back when he was just 16.

Student Connor, now 18, faced months of physiotherapy after his accident.

He says: ‘It was very frustrating to put my sporting career on hold. I felt a bit unnecessary- I felt like I wasn’t doing what I was good at.

‘Fortunately my athletics club was very supportive and they organised for me to go on my first training course shortly after my injury.

With Fixers, Connor has developed a series of posters urging other young athletes to consider coaching, after noticing that the profession lacks young instructors. 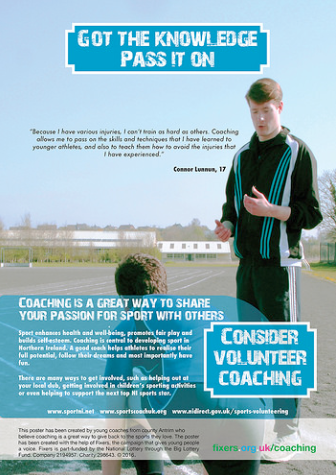 Connor says: ‘When I went on courses I realised that there was no-one there who was my age.

‘Most coaches are older, but younger athletes who have competed offer lots in terms of experience and have a great understanding of current training exercises.’

He says: ‘I want other people to know that coaching isn’t just for people who are done with competing.

‘Although I have had some serious injuries and they have put me back, I am competing again now.

‘But for me, training others now comes before competing.’

Connor says that coaching can sometimes be more rewarding than competing.

He says: ‘I have actually found it more rewarding being able to pass on my knowledge to someone else, as opposed to getting personal rewards through competing.

‘I feel a great deal of pride being able to pass on what I know.’