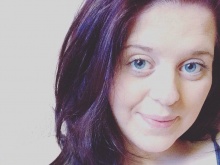 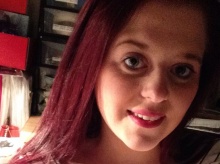 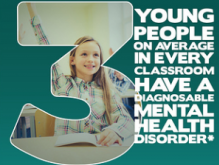 A school girl whose mental health disorder was dismissed as ‘a teenage phase’ wants adults to recognise that young people can have problems too.

Megan Lett has body dysmorphic disorder (BDD), which causes people to have a distorted view of how they look and to spend a lot of time worrying about their appearance.

It takes her as long as four hours to get ready for school because she is constantly checking her hair and makeup in the mirror.

The 17-year-old says: “It was a struggle to confide in anyone as I was worried they would think I was vain.

“But what people don’t realise is that when I look in the mirror, I’m horrified by my appearance.

“I will spend hours doing my hair and makeup, or choosing an outfit, until I’m happy.

“When I tried explaining my problems to an adult, they dismissed it as a teenage phase.

“So my campaign with Fixers is to show that mental health disorders don’t discriminate – they can affect anyone and it’s important to get help.”

Eventually Megan, from Kelso in the Scottish Borders, visited her GP who diagnosed her with BDD and offered therapy.

She says: “It was a relief to be taken seriously; it meant that I could start addressing my problems.”

With Fixers Megan has designed a newspaper advert stating: ‘Three young people on average in every classroom have a diagnosable mental health disorder.’

The research urges parents to recognise potential mental health disorders in children so that they can seek help.

Click below the see a larger version of the advert: 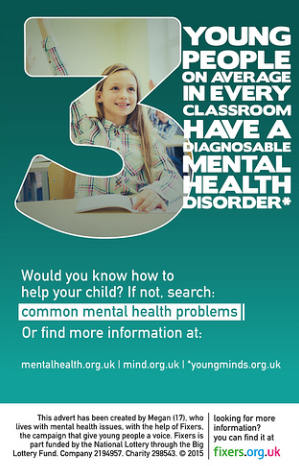 Megan says: “I wanted to target the older generation so I decided to create a newspaper advert to reach people who use traditional forms of media.

“I hope it will inspire parents to be in tune to their children’s mental health.

“Having a mental illness can be very isolating; you need all the support you can get.”