Be Aware, Be There 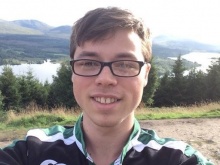 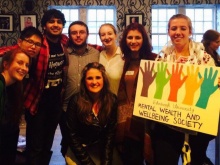 Members of the Mental Health and Wellbeing Society 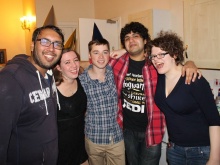 A group of medical undergraduates from Edinburgh want to see more help for young people who are struggling with mental health issues at university.

David Ryan, 21, and his team realise that student life can be stressful so they’re encouraging their peers to be aware of those in need of emotional support.

‘Mental health has affected us all either directly or indirectly,’ he says. ‘As a student, life can often be quite a tumultuous experience, especially when you’re living away from home.

‘Last year, we formed the Mental Health and Wellbeing Society at The University of Edinburgh to provide an informal, friendly space where students could talk about their issues.

‘We want people to be more aware if someone’s having a tough time with their mental health and be there to help them through it.’

With Fixers, the group has helped to create a series of posters to get their message across.

The campaign focuses on three things - the idea that mental health is an invisible illness, how talking about it can help and that it’s just as important as physical wellbeing.

Click the image below to see larger versions of the posters. 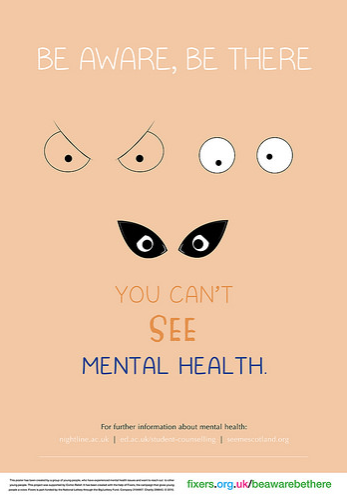 ‘We wanted the posters to be very simple and ensure that they grab students’ attention,’ adds David.

‘Our hope is that they will inform young people of how significant positive mental health is.’

The group plan to launch the campaign at the university on February 23rd before Members of the Scottish Parliament, mental health charities and young people.

David adds: ‘We want to put the posters in university buildings and halls of residences. We also intend to get the posters on e-displays and computer screens in the main library.

‘Our simple and direct message to the whole student population is, be aware and be there.’