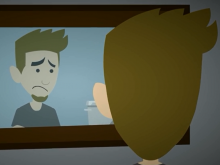 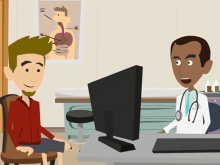 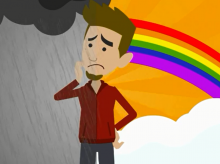 A young man has described living with bipolar disorder as a ‘painful experience’ after the mental health condition, which causes manic depression, left him confined to his home for days.

Twenty-four-year-old ‘Michael Knight,’ whose real name has not been used, is campaigning with Fixers to encourage others in his shoes to stop bottling up their problems and get help.

Michael, of Belfast says: ‘When I was first diagnosed, my mood would change over the weeks from positive to negative and back again.

'I tended to experience hypomanic states in which I was very lively, outgoing and motivated.

‘Then, out of the blue, I would descend into a painful existence. My energy levels were low and I didn't ever want to leave bed.’

He says: 'I would dread socialising because I'd always over-analyse what I was saying to people or get paranoid about the way they looked at me and ruminate about it for hours.

‘I felt more empty than anything. My productivity hit an all-time low, and my self-esteem was non-existent.’

With Fixers, Michael has helped to produce a short animation.

Based on his own experience with bipolar disorder, the film urges others with the condition to not lose hope.

He says: ‘I hope others can relate to the film. Every young person has had a “duvet day” where they can't be bothered engaging with life.

'But the bigger picture becomes apparent when you face these things day after day. Hopefully this could provide some insight into what it's like to live with the disorder.’

Michael, who says he’s turned a corner with his mental health, hopes the campaign will help others with similar experiences in their journey towards recovery.

He adds ‘I can happily say that I'm well now, but not everyone is as lucky and it can take some time to get the treatment right.

‘I think the key is to get help as soon as you can and remember it’s not your fault or anything to feel guilty or weak about.’