Doctors, Talk To Me 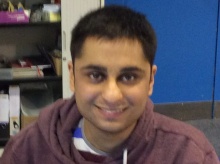 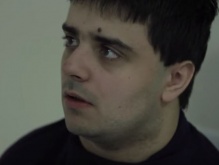 The main character in the film 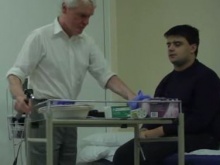 Gurdesh Birdi is calling for better communication between doctors and patients with learning disabilities, saying he often feels overlooked by medical staff.

The 22-year-old from Leeds and his team, who all have learning disabilities, feel they are ignored by GPs during appointments, as they prefer to talk to their parents and carers.

‘We want doctors to understand how we feel,’ explains Gurdesh.

‘If the doctor speaks to the parents, the patient might misunderstand and think that something is wrong with the parent and not them.

‘They should also explain what they are doing.

'For example, when they use a stethoscope to check heartbeats.

‘By communicating with people who have learning disabilities, the patient might have a better understanding about what is happening.’

With Fixers, the group have helped create a film to show how confusing a trip to the doctor can be for someone who has learning disabilities.

The piece highlights the difference between an uncommunicative doctor and one who is friendly and open.

You can watch the group's Fixers' film, 'Doctors, Talk to Me', at the top of this page.

‘I know people who have bad experiences with this,’ comments Gurdesh.

‘It would be reassuring if doctors just talked and explained things to them.’

The group hope to show their film to healthcare professionals and anyone wishing to become a doctor.

‘My overall message to doctors would be to encourage them to watch the film,’ Gurdesh adds.

‘Speak to the patient, not the parent.’