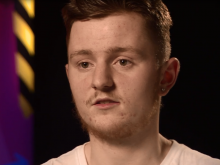 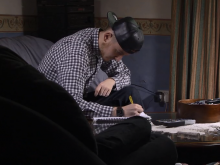 Louis in the broadcast film 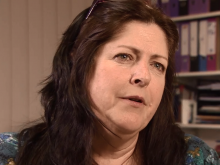 When my mum died, it hit me hard. I bottled it up because I didn’t really trust anyone with my personal life and everyone that tried to help me, I pushed away. I ended up drinking a lot and getting into fights, which I regret now.’

Louis Choules from Margate is using his experience of bereavement to show others, who have lost loved ones, the importance of talking to someone.

His story was broadcast on ITV News Meridian (E) on Thursday 7th January.

In the TV film, the 19-year-old explains how his mother’s death affected him and talks about using music to express his feelings.

‘I was 13 when my mum passed away. I felt anger, pain and sadness. I felt like she was leaving me behind,’ explains Louis.

‘As soon as I found music, it changed my life. It’s a release of stress and a way to explain how you’re feeling. With Fixers I'm making a music video relating to my mum's death.

‘I want to help people understand that they shouldn’t turn to things like alcohol or drugs. They don’t help, talking about it does.’

With the help of Fixers, Louis has produced a music video about his experiences.

He raps about coming to terms with his mum’s death and encourages others dealing with bereavement to know that they’re not alone.

Watch the video 'Highs & Lows' by clicking below.

She says: ‘It’s common for young people, who have experienced the death of a parent, to find it difficult to talk about their feelings - particularly teenage boys.

‘Quite often, the family find it difficult to talk to each other because they’re worried about upsetting each other. ‘

‘I think it’s really useful what Louis has done because he’s showing other young people a very good way of being able to express their feelings and to move on with their grief.’

Louis adds: ‘It’s important for me to help people because I don’t want to see young kids going through the same thing that I did or going down the same path.

‘I want young people to find that creative outlet that I have so it can put them on a positive track.’