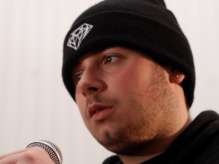 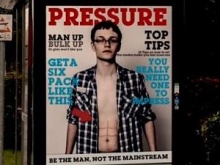 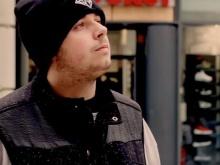 A scene from the music video

Mark Thomas is urging media outlets to use their influence for good, as he’s concerned that some images shown on TV and in magazines can have a negative impact on young people’s self-esteem.

The 19-year-old from Cardiff feels the media share material that can create unhealthy ideas of body image, rather than broadcasting messages of support to their young audience.

‘I think the media influence young people to be a certain weight,’ explains Mark.

‘They Photoshop celebrities, who their audience look up to, and this can influence people to starve themselves so they can look like their idols.

‘However, I don’t feel the media raises much awareness about domestic abuse, self-harm or mental ill health.

‘Many people go through these problems with no one to talk to.

‘The media should show that everyone is different and special.’

With Fixers, Mark has created a music video to accompany a song he’s written.

It details the struggles some young people face and suggests that these aren’t always given exposure by mainstream media.

You can watch Mark’s Fixers music video, 'Issues', at the top of this page.

‘I am over the moon with the finished piece,’ he comments.

'I wrote the song to raise awareness and this video expresses that.’

Mark hopes to see his film shared on social media to reach as wide an audience as possible.

‘If young people have any problems or concerns they should get in touch with local organisations,’ Mark adds.

‘My message to them is not to copy what they see in the media - everyone is different and individual.’

Mark's project was supported by the Wellcome Trust.