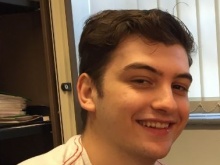 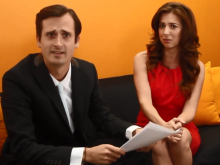 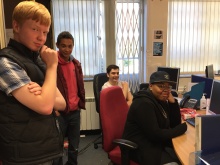 Freddy and other young people

Freddy White and his team from Slough in Berkshire are tackling homophobic bullying in schools through education.

The 18-year-old, who was victimised for his sexuality growing up, wants people to understand the damaging impact this discrimination can have on other members of the LGBTQ community.

‘One time this guy told me I should be set on fire,’ Freddy explains.

‘What hurt most was the fact that people thought it was okay to say stuff like that, as if it was a perfectly normal thing to do.

‘Others said nothing, which almost seemed worse because it was like they were in silent agreement with the cruel comments.

‘I wanted to do something and speak out because hearing those insults left me feeling anxious and lonely and I didn’t want others to feel the same.’

With Fixers, Freddy and his team have created a film to spread their message.

The news parody portrays both the anchor and the roving reporter as bigots who promote anti-LGBTQ myths and disagree with comments from those opposed to their views.

Watch the group’s film ‘What the Gay is Happening to our Country? Homophobic Bullying’ at the top of this page.

‘We hope to show people how ridiculous they sound when they speak about LGBTQ people in a negative way. The film does that through comedy,’ says Freddy.

The group plan to show their film at assemblies in schools around Slough and hope that teachers will lead discussions to challenge the negative misconceptions.

‘We would like our film to be seen by young people, particularly students as this is the age group that we feel needs to be educated to change any negative beliefs,’ Freddy adds.

‘LGBTQ people are normal people just like everyone else -being gay is not a choice.’

This project is supported by Heathrow Community Fund.