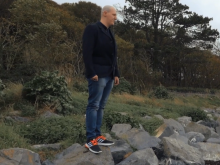 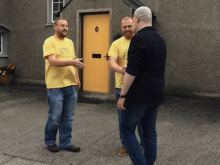 Gareth with Stuart and Gareth from Helping Alopecia Trust 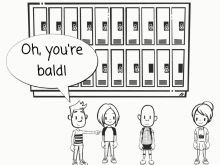 A scene from Gareth's Fixers animation

‘When I was at primary school, my friends wondered what was happening to me. At junior high they were more inquisitive and would ask, “have you got cancer?”’

Gareth Chandler (20) from Annaghmore in County Armagh was diagnosed with alopecia after his hair started to fall out as a child and now wants more support for others who have the condition.

His story was broadcast on UTV Live on Sunday 6th December.

In the TV piece he talks about his struggle with hair loss and meets a support group to discuss the importance of reaching out.

‘I was seven when I got alopecia,’ explains Gareth.

‘I went to the GP, who said that it was one of those things and I wasn’t directed to any support or shown anywhere to go.

‘Just over a year ago, it affected me mentally and I had to drop out of school.

'I just got some comments and I took it to heart. I’m trying to raise awareness because not everyone knows how alopecia affects people.’

Gareth Long, Chairman of the Helping Alopecia Trust, features in the broadcast in support of the campaign.

He says: ‘The lack of support that Gareth felt he had at the beginning is a sentiment felt by the majority of young children with alopecia.

'When my daughter was diagnosed, we initially searched for a support network within Northern Ireland and it was non-existent.'

Gareth Chandler has helped create a short animation, with Fixers, which he hopes will shed some light on the condition.

You can watch his Fixers film 'Alopecia Awareness' below.


‘It shows there’s someone out there who’s confident and can talk about it,’ he adds.

'Hopefully people can use the film to show that alopecia doesn’t have to define who you are.’