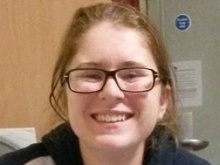 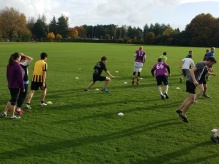 Ellie and her team hold an Ultimate Frisbee taster session 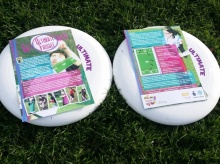 The 20-year-old from Omagh in County Tyrone, who was introduced to Ultimate by her sister, says it's an inclusive game that she'd like to see played more in secondary schools.

‘I went along to a training session at Queen’s University,’ Ellie explains.

‘It was a mixed group of boys and girls and about half the people were as new to the game as I was.

‘The school I went to before university only offered netball and hockey for girls.

‘In Northern Ireland, games traditionally have a historic association with religion, but Ultimate is completely different in that respect, because it is relatively new.'

Hear from others keen to raise the profile of sports. Read their stories.

With Fixers, Ellie and her team have helped to create a flyer to give a brief introduction to the sport and explain the rules.

To read the flyer, click on the images below.

The group also held a taster event for students, giving them the opportunity to experience the game first-hand. They received positive feedback.

After the session, 19-year-old Carys, from County Antrim said: ‘It's easy to pick up and fun to play. I wish I'd become involved sooner. My dad is the Vice Principal of my old school so I’ll be asking him to consider getting it played there.’

Ellie plans to distribute her flyers to secondary schools, to showcase how inclusive Ultimate Frisbee can be.

‘It’s much more than a sport,’ Ellie says.

‘When I play Ultimate, I feel like I’m part of a family and part of a community.

‘It’s a great way to get to know people.’

To find other sports resources, and watch Fixers films, click on the image below.