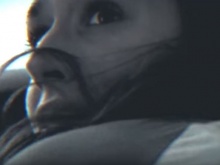 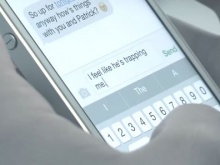 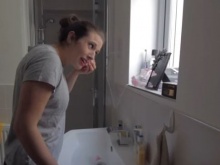 The character washes her face after she is attacked

Chloe has experienced the devastating impact of domestic abuse and is urging others, who feel threatened in their relationships, to ask for help.

The 18-year-old from Hampshire wants to show those with a controlling or violent partner that things can get better, if they choose to talk to someone.

‘I was in an abusive relationship and often felt that I was alone,’ explains Chloe.

‘I saw things as my fault and thought I was to blame for his reaction. One day I tried to take my own life.

‘I told someone what had happened and they made me realise the importance of being in a healthy relationship. At this point I realised I was worth more.’

With Fixers, Chloe has helped create a film that depicts a character who feels trapped by a controlling boyfriend.

After he hits her, she realises that she can make the choice to leave and seek help.

You can watch Chloe's Fixers film 'Losing Control || Surviving Domestic Abuse' at the top of this page.

‘I wanted to highlight that you should talk to someone that you can trust,’ comments Chloe.

‘I’ve moved on and am now in a happy relationship.

‘Although I went through this, it has made me a stronger person.'

Chloe hopes her film will be shared in schools and on social media, so it reaches as wide an audience as possible.

‘Young people should think, act, listen and communicate,' she adds.

‘I hope those affected will watch the film and find the strength to speak out.'