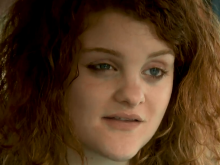 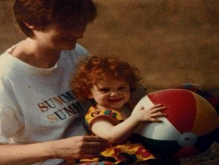 A photo of Naomi with her mum when she was younger 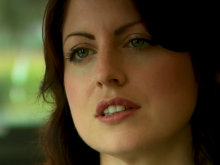 ‘Since she’s become ill, I appreciate what she’s always done for me and all her little quirks a bit more. I realise how special she is and how lucky I am to have such a fantastic mum.’

After her mum was diagnosed with incurable cancer last year, 21-year-old Naomi Barrow from York wants to improve support for young people whose parents have terminal illnesses.

Her story was broadcast on ITV News Calendar and ITV News Tyne Tees in October 2015.

In the TV piece, she meets others with similar experiences and explains that talking about things can be a real help.

‘My mum was first diagnosed with breast cancer in summer 2012, just after I finished my A-Levels. In February 2014 she was diagnosed with terminal cancer,’ explains Naomi.

‘I googled at the time and found loads of support for under-18s and for parents of terminally ill children, but nothing for people my age, which was isolating.

‘I want young people to understand that they’re not alone, and for those around them to know that any support they can give is really needed.’

‘There is a gap in provision for young adults that are going through similar situations,’ Hayley says.

‘That transition into adulthood is such a vulnerable time, even if you’re being supported.

‘But if you haven’t got the support and you’re tackling issues such as terminal illness within the family, it can be even more difficult.’

Naomi adds: ‘Yes it’s horrible and I hate it, but I think I’m lucky to be able to raise awareness about the issue.

‘Without this kind of thing, we just wouldn’t be able to talk about it so I think it’s an amazing opportunity.’

For resources on this issue, and to watch more Fixers films, click on the image below.