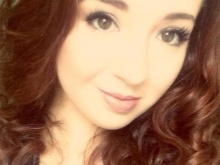 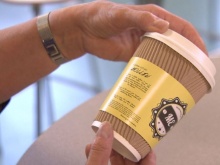 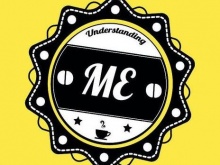 The logo on the coffee cup sleeves

People who mistake those with ME, or chronic fatigue syndrome, for someone who is ‘tired’ or ‘lazy’ are being corrected by 17-year-old Hollie Cullen from Plymouth.

Hollie developed ME at the age of eight and has at times been left bedbound by the condition, which can cause persistent exhaustion, dizziness and pain.

She wants others to be less dismissive of ME and is campaigning to highlight the impact it can have.

‘Growing up with ME was terrifying. For a long time I was unable to move, barely able to speak and in pain,’ explains Hollie.

‘There was a point where I thought it was the end and that I wasn’t going to make it through Christmas.

‘The severity of these symptoms are different for everyone. For some people they are extreme and for others less so.

‘It’s hard enough being ill, but to have so much misunderstanding makes it even harder.

‘Friends would be confused as to why I couldn’t come into school and others didn’t have a clue what ME was.’

With Fixers, Hollie has come up with an original way to spread her message.

The designs include some details about Hollie’s experiences as well as some facts and figures about ME and links to websites offering further information.

To take a closer look at the design, click on the image below. 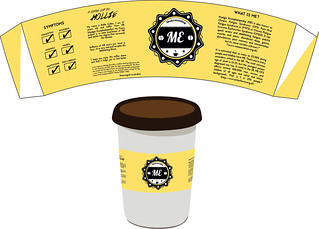 ‘People will often tell you to have a coffee to perk yourself up and feel better - however with ME it’s not that simple.

Hollie hopes to help others understand the condition, while encouraging them to extend empathy to those who live with it.

‘I never want to hear anyone say that they are facing stigma because they have ME,’ she adds.

For more information and help with this issue, visit www.actionforme.org.uk or www.meassociation.org.uk.

Hollie Ransley is using a twist on a famous fairy tale to
help others understand ME. Watch her film here.