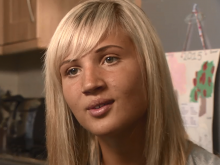 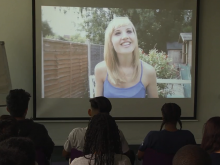 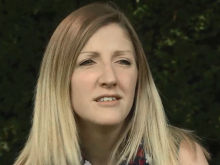 ‘It took over my brain. Every minute of every day, all I ever thought about was what I had eaten and how much I needed to exercise so I didn’t gain weight.’

After a six year battle with anorexia, Jo Thompson wants to tackle the stigma attached to eating disorders, so that others affected are able to get help.

Her story was broadcast on ITV News Central on Thursday 10th Septemberr.

In the TV piece, Jo, who’s now in recovery, speaks about her campaign and introduces a film she’s created with the help of Fixers.

She shows it to a group of young people who learn that at one point Jo was given just 48 hours to live.

‘I couldn’t do anything normal without thinking about food, exercise, calories and how I looked,’ explains 23-year-old Jo, who’s from Solihull.

‘Then, something clicked in my head and I started to realise that I really wanted to live a normal life.

‘I had missed out on so much and I was determined to get better.

‘I now want to change common misconceptions about eating disorders and make people more aware of what it’s like to suffer from one.’

In the film she’s created with Fixers, Jo shares her experiences of anorexia and urges others facing similar struggles not to lose hope.

You can watch the film ‘Eating Disorders: Jo’s Story’ below.

‘I think the message needs to be about early intervention,’ Rachel says.

‘Children need to have the confidence to speak to someone they trust, to acknowledge they’ve got a problem and to get help.’

Jo adds: ‘I have been in recovery for six years. I have two beautiful children and I am training to be a midwife.

‘Never give up. Recovery is possible.’

You can watch Jo's TV film here at the top of this page.

Kat Pugh is campaigning for earlier intervention when

it comes to treating eating disorders. Watch her TV film.