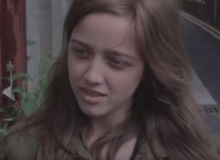 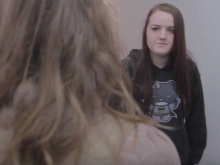 The film shows a young girl struggle to communicate 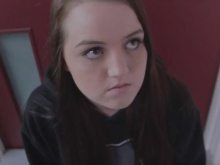 After feeling that she had little useful support during a night in a hospital A&E department, Catrin is determined to see that those in mental distress get better emergency treatment.

The 16-year-old from Cardiff felt neglected and misunderstood after she was ‘left on a sofa’ because the hospital lacked facilities to deal with a mental health problem.

‘I know how it feels to be ignored in a crisis,’ explains Catrin.

‘If young people feel that they aren’t being taken seriously, this can lead to them feeling like they have no hope in getting better.

‘Having people in A&E who are mental health professionals would mean those admitted would get care from people who specialise in that area.

‘Help early on will decrease any chance of suicide attempts.’

With the help of Fixers, Catrin has made a film that shows how feeling unsupported can undermine a young person who is struggling with their mental ill health.

It follows a young girl as she unsuccessfully looks for help from a friend, teacher, her mum and finally a medical practitioner.

The film ends with an appeal for earlier intervention on mental health, before it becomes a crisis.

You can watch Catrin's Fixers film 'Safe?' at the top of this page.

‘I am very pleased with the finished result - It shows all areas of dealing with mental health,’ says Catrin.

‘It brings up the fact that people only take a young person seriously when they have reached crisis point.’

Catrin hopes to have the film seen in hospitals.

‘Medical professionals should understand from a young person’s perspective what it is like to deal with mental ill health,’ she says.

‘It’s been rewarding to be able to have my say and show exactly what it’s like for me and many others.’