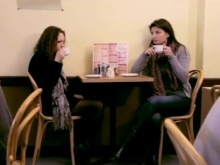 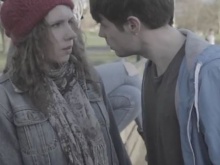 A fictional couple are played by actors in the film 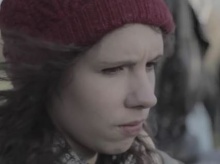 Determined to help others avoid unhealthy relationships, ‘Rachel’ wants to show young people how to spot the signs of domestic abuse.

The 17-year-old from Kent, whose real name has not been used, has suffered abuse in the past, and hopes to use her experiences to encourage others in a similar position to talk to someone.

‘Because I’ve been through it, I want to help others before it’s too late for them,’ explains Rachel.

‘They should look out for any unusual behaviour such as manipulation.

‘When you’re in that situation it can become difficult to leave so they should get help straight away.’

With Fixers, Rachel has helped create a film to highlight some of the more subtle ways an abusive partner can exercise control.

In the film, a fictional character speaks about her boyfriend checking her phone every day, putting her down in front of his friends and ignoring her in public - before becoming violent.

She’s seen having a conversation with her mum, who is unaware that her daughter is in an abusive relationship.

A message at the end warns that the signs of abuse might not be obvious to everyone.

You can watch Rachel's Fixers film 'Behind the Smiles' at the top of this page.

‘I think the film is really good,’ she says.

‘It gets the message across in a really clear way.’

Rachel plans to show her film as part of a workshop she’ll deliver at a college. She’ll be accompanied by a representative from the Oasis Domestic Abuse Service, who will give a speech on domestic abuse.

‘However any age is ideal because this could happen to anybody.’

For more information and advice, visit womensaid.org.uk, refuge.org.uk or call the National Domestic Violence Helpline on 0808 2000 247.