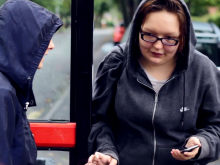 Fixer Soph Hopkins in the film 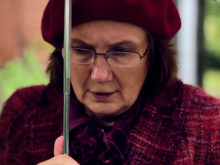 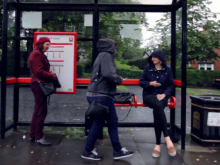 Tired of the negative stereotypes often attached to young people, Soph Hopkins is asking older members of the community not to judge her age group unfairly.

The 20-year-old from Tyne and Wear wants to challenge the misconception that all young people are bad news, encouraging older generations to be more trusting of others her age.

‘You could be stood at a bus stop with friends, minding your own business, and people will give you funny looks just because you’re wearing a hoodie,' explains Soph.

‘There are others who cross the road if they see you coming. It’s really hurtful and makes us feel like we don’t matter.

‘My aim is to encourage people to look beyond misconceptions of young people.

'Everyone should be treated as an individual.'

With Fixers, Soph has helped create a film to get her message across.

It shows a lady left pleasantly surprised at a bus stop when a young person, who she initially assumes is up to no good, helps her check when the next bus is due.

A plea at the end of the film reads, ‘don’t judge us before you know us. My hoodie doesn’t mean I’m anti-social.’

Watch Soph’s Fixers film 'Social Stereotypes' at the top of this page.

‘I want people to give others a chance and not assume the worst in somebody.

‘I’m sure there are some bad eggs who cause trouble, but most of us are good at heart and that’s what the film is about.’

Soph plans to show her film to a group of older people at a local care home and also hopes to share her resource on social media.

‘I feel that people need to see the positive side to young people instead of focusing on the negatives,’ she adds.

‘I want others to be proud of us and recognise the difference young people can make to society.’

Mind the generation gap! Sarah Davies wants to improve relations between
young and old. Take a look at her poster campaign and watch her TV film.