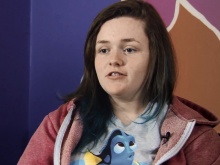 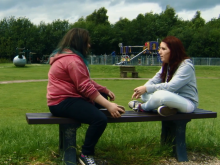 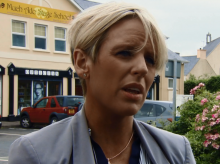 ‘Cyberbullying can lead to depression, anxiety, self-harm, suicide and feeling alone. It’s not okay. It’s not funny. It’s hurtful to other people.’

Sixteen-year-old Amy-Leigh McGuire and Michaela Baxter (23) are part of a group from Castlederg in County Tyrone who want to help stamp out cyberbullying by showing the impact it can have.

Their story was broadcast on UTV Live on Sunday 13th September.

In the TV piece, the pair explain more about their campaign, speak to other young people and share their experiences of online abuse.

‘I have a growth problem,’ says Michaela. 'People make fun of it. Some go too far and it’s really hurtful.’

Amy-Leigh adds: ‘I received some sectarian messages. It angers me because this should not be an issue.

'Our Fixers project is to raise awareness of cyberbullying and to tell the bullies to stop.'

With the help of Fixers, the group made a film to highlight how cyberbullying can affect young people and what they can do to help prevent it.

You can watch the Fixers' film "Castlederg Youth Forum Internet Safety" below.

In the TV piece, Sergeant Joni Beatty from the Police Service of Northern Ireland supports the group’s campaign.

She explains some of the measures being introduced to monitor this type of behaviour.

‘Cyberbullying is definitely something that we’re receiving more reports of at the minute,' she says.

‘A cybercrime unit has been set up to deal specifically with this issue.

‘It's something that is very important to young people, so it’s something we are putting a lot of resources into.’

Michaela adds: ‘Our message to the bullies is please stop.’

‘Think about what you are doing before it’s too late.’