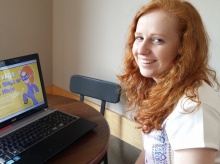 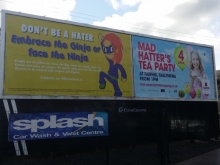 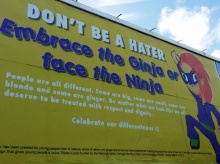 A close-up of the billboard on display

Aware that some people are bullied about the colour of their hair, Megan Paul wants her peers to treat others with respect.

The 20-year-old from Magherafelt in County Derry/Londonderry has experienced verbal abuse from strangers and is now urging others to celebrate their differences.

‘I’ve had people shouting “ginger” out of their car windows at me,’ explains Megan.

‘When I was younger, their comments would hurt me, but I’m able to deal with it now. It doesn’t upset me. It just makes me feel awkward.’

With Fixers, Megan has helped produce a billboard campaign, featuring a cartoon character with red hair.

Using the slogan ‘Embrace the Ginja or face the Ninja’, it asks people to ‘celebrate our differentness’ and treat others fairly and with dignity.

To enlarge Megan’s Fixers billboard design, click on the image below. 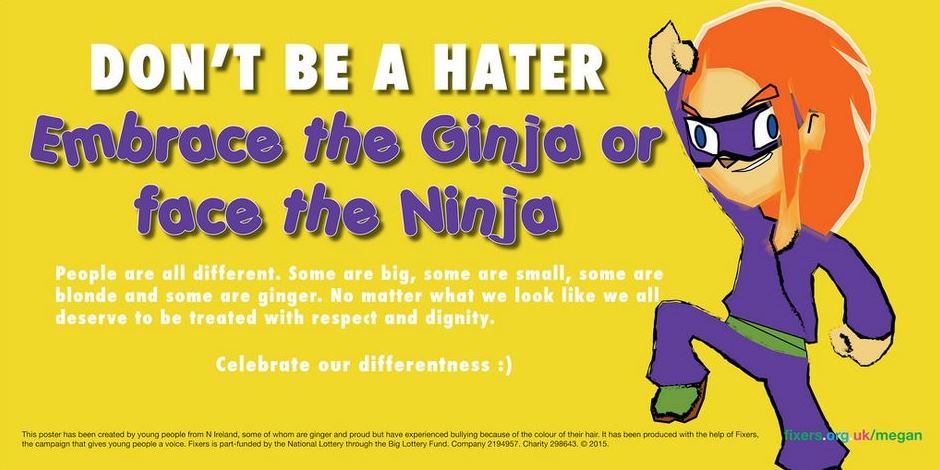 ‘The world is made up of so many different types of people,’ Megan says.

‘We are all individuals and people should embrace that and respect each other.

‘I think the billboard campaign is good. It’s light-hearted but it gets my point across.

‘I’ve had really positive feedback – people have loved it!’

Megan wanted to take action after seeing people hurt by comments about their appearance.

‘I hope my campaign makes people think twice the next time they want to make a remark about someone because of the colour of their hair or how they look.

‘I hope they think about that person’s feelings.’

Shafiur Rahman urges others not to let bullies bring them down.
Find out more about his Fixers campaign.