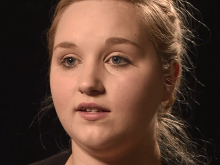 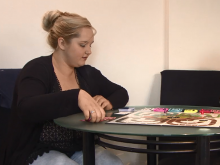 Melissa with her Fixers board game 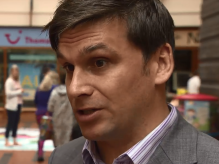 ‘When I was living in a hostel, a lot of people did get into trouble with money. They would spend it all on stuff that they wanted and not needed and then they would end up with hardly any food.’

Melissa Jackson (23) from Llandudno in North Wales is using her experience of living on a budget to help others better manage their money.

Her story was broadcast on ITV News Wales at Six on Thursday 6th August.

‘I learned from my mum,’ explains Melissa.

‘When she went shopping, she spent it on the stuff she needed first.

‘When you are living at home with your parents you don’t really understand it – not until you are out there on your own.’

With Fixers, Melissa and her team have helped create a board game, called 'Going it Alone', to teach players how to save money and make smart financial choices when living independently.

It's been designed to use in schools and with youth groups.

Chris Lightfoot from debt management service, Stepchange, supports the idea and appears in the broadcast piece.

‘A project like this really would help people get a grounding in money management from an early age.’

You can watch Melissa’s TV film here at the top of this page.

Fixer Jamie Olive shows young people how to make meals on a budget.
Take a look at his recipe book.