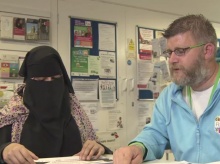 Haleemah works on her scratch cards with the Fixers team 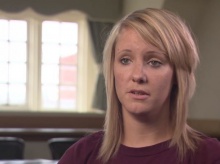 'I don’t think people should be abused for any reason, whether they’re disabled, gay or look different. I think it’s really important that all victims of hate crime gather together and stand united.'

Concerned that hate crimes often go unchallenged, Haleemah Patel, who wears a niqab, is encouraging people who witness abuse to speak out against it.

Her story was broadcast on ITV News Central on Thursday 6th August,

'Some people assume that because I wear a veil, I might be a terrorist,’ explains 16-year-old Haleemah from Leicester.

‘People say “go back home”, which makes me feel really sad because I was born and bred here.

‘The worst I’ve ever experienced was when someone tried to pull off my veil.

'I can’t believe someone did that to me.

‘Those who see another person being verbally or physically abused shouldn’t just walk by, they should stop and ask if they’re okay.

‘I hope to get rid of the hate and increase the love in this world.’

To take a look at Haleemah's scratchcards, click on the image below.

Stevie-Jade Hardy, Lecturer in Hate Studies at the University of Leicester also appears in the broadcast in support of Haleemah’s campaign.

‘Hate crimes are acts of intimidation, harassment and violence directed towards someone on the basis of their identity or perceived difference,’ she adds.

‘Any campaign such as Haleemah’s is fantastic because you need community members themselves to speak up and say don’t be a bystander.

‘Don’t just let this happen. We all have a responsibility to challenge’.

You can watch Haleemah's TV film here at the top of this page.

Joni Clarke also wears a veil and urges people not to
judge others based on stereotypes.