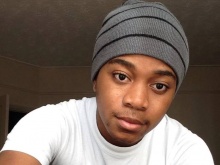 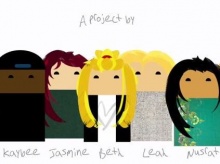 Some of the group in animated form 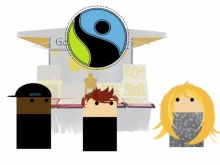 The Fixers film draws attention to the Fairtrade symbol

Concerned about the number of children forced to work, a group from Bristol wants to help put a stop to child labour.

As part of their research, the team discovered that in Ghana, one in six children aged 6 to 14 are sent to work, often in hazardous conditions.

They want to raise awareness of the issue and to encourage others to think more carefully about whether the products they buy are Fairtrade.

Karabo Moruakgomo, one of the young people involved in the campaign, said: ‘I feel scared and frightened for those children,’ 20-year-old  explains.

‘I think it’s so unfair.

'Those kids will never get a chance of a decent future.

‘My friends and I want to make a difference.’

With Fixers, the team have helped create an animated film.

Set in a market, the main character visits different stalls where he's taught about child labour.

He's also encouraged to look out for the Fairtrade symbol on the goods he buys.

‘We wanted the animation to raise awareness of child labour in a simple way,’ Karabo adds.

‘I feel happy that the film does this.

You can watch the team’s Fixers film ‘A Day in the Marketplace: An Animation on Child Labour’ at the top of this page.

The group plan to show their film in local schools. They hope those who see it will learn how to recognise when goods have been produced in a fair and ethical way.

They also want young people to share the resource with their parents, encouraging them to make informed decisions when buying items such as chocolate, fish or gold.

‘I want people to open their eyes and think before they buy anything,’ Karabo says.

‘I want all children to enjoy their childhood. No child should have to work.’

Kevin Ackermann shows how to spot when someone is trapped into working
long hours for minimal pay. Watch his Fixers film about human trafficking.

About The Freedom Group