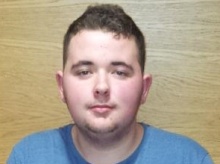 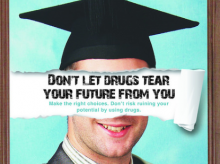 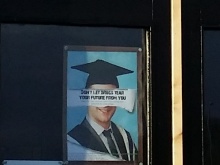 After drugs claimed the lives of people close to him, Jordan O’Hara wants to warn others his age about the potentially devastating impact of substance misuse.

The 18-year-old from Ballymena in County Antrim is highlighting the dangers, to encourage young people to make responsible choices.

‘I’ve known people disappear from my life either through death or growing apart because of drugs,' explains Jordan.

‘It hurts to lose someone, especially when it’s in such a tragic way.

‘I hope to get across to the people in my town that drug abuse is real and it can ruin lives.’

With Fixers, Jordan and his team have helped create a poster campaign to drive home their message.

It shows a ripped graduation photo, accompanied by the words: ‘Don’t let drugs tear your future from you. Make the right choices. Don't risk ruining your potential by using drugs.'

To enlarge Jordan and his team’s Fixers poster, click on the image below. 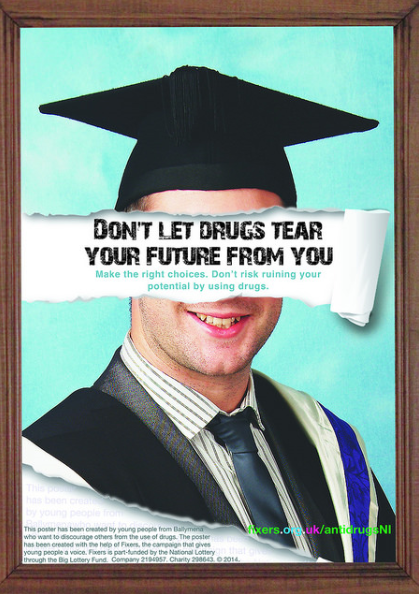 ‘I like the poster and the concept,’ says Jordan.

‘It’s not like many other anti-drugs posters you see, which are usually quite graphic.

‘We thought that using a simple image in an understated way is very powerful and works just as well as showing the gory consequences of drug use.’

Jordan launched his campaign with a presentation at Ballyloughan Youth Club and through a series of workshops with pupils from Slemish College.

One of the young people involved, said: ‘It's the quote that really works. Drugs do rob you of your future. I know people who have messed up in their GCSEs and A-levels because they got caught up in drugs. I even know someone who lost a job because of it.’

Jordan adds: ‘The poster really has been the kick-start of something I think can be really big.

‘Sure, you may face obstacles along the way, but with the determination, know-how and the right support, you can make a difference.’