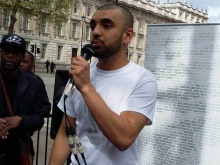 Bilal speaking at the gathering 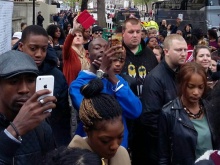 People at the event 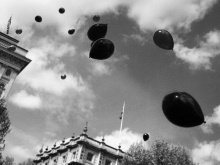 Taking a stand against youth violence, Bilal Awan joined more than 200 people for a minute silence opposite Downing Street to remember those killed in knife and gun crime.

The 26-year-old from London was amongst many who gathered on May 1st including community figures, ex-gang members and those who've lost loved ones through this type of crime.

The event, organised by Bilal, was part of the One Minute in May campaign originally set up by Mark and Tracey Prince, whose son was fatally stabbed in 2006.

Bilal hopes this gathering can educate young people about the dangers of knives and guns.

‘It was amazing. We had people from all over the country turn up,’ explains Bilal.

‘I gave a speech myself, which was quite emotional because I knew there were parents in the crowd, who’ve lost children. But it was a privilege to speak at the same time.

‘We also set off balloons - each one representing a life that’s been lost to knife and gun crime in the UK.

‘One of the most amazing things about the day was everybody was united. There were former gang members standing side by side and nobody cared what postcode they were from.’

Bilal worked with Fixers to design the T-shirts for the event, which he hopes to hold every year.

His own aspirations of becoming a professional footballer were dashed after a gang related incident left him with serious leg injuries when he was younger.

Now as a youth worker, Bilal has made it his mission to help young people steer clear of crime.

He adds: ‘At first, I was really angry because all I wanted to do was play football, but after a while I began to accept my situation.

‘Working with young people has allowed me to give something back and to stop others from making the same mistakes I did.

‘I think doing more events like this will promote unity among individuals and hopefully bring an end to this mindless violence. But standing together is the key.’

to steer clear of crime. See their television story.