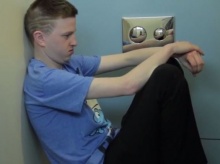 Joseph Vinson plays the lead role in his Fixers film 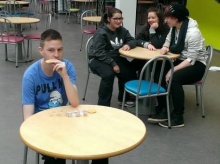 Joseph Vinson on the shoot day for his Fixers film 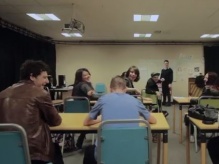 The film shows the main character bullied in class

The 20-year-old from Seaham in County Durham was born with a genetic disorder.

Along with a group of other young people, who also have disabilities, he’s aiming to raise awareness of the misery caused by bullying, encouraging those who see it happening to help stop it.

‘I was called egg head, bean and peanut because of the shape of my head,’ explains Joseph.

‘I didn’t like it. I was hit with a tennis racket and pushed to the floor’.

With Fixers, Joseph and his team have helped create a film showing a day in the life of a young person with a disability who is being bullied.

Joseph plays the lead role in the short drama, which reveals the types of bullying he endured – including name-calling and being laughed at.

The film ends with a thought-provoking message which states that feeling sorry for someone is not enough.

‘It makes people aware that it’s not right to bully people with disabilities.’

Watch Joseph and his team’s film ‘Bullying and Disabilities’ at the top of this page.

Joseph plans to show his Fixers film in local schools as well as at his college and at the youth centre he attends.

He hopes that the resource will encourage bullies to reflect on their behaviour.

‘No one should have to experience prejudice or bullying,’ he adds.

For more information and advice on bullying, visit the Get Connected website.

Eloise Sears is urging people to reflect on the way they
respond to bullying. Watch her TV story.