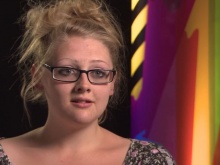 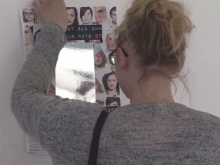 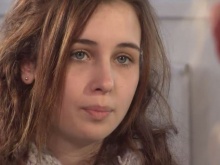 ‘I got so low I didn’t care about myself any more. Some days I would refuse to go to school. In the mornings I would wake up feeling sick from nerves.  I was terrified.’

Eloise Sears (18) from Hastings knows what it’s like to be bullied and is encouraging others to take a stand and offer help if they see someone being picked on.

Her story was broadcast on ITV News Meridian (E) on Thursday 14th May.

In the TV piece, she explains that everyone can play a part in tackling abusive behaviour and speaks about a poster campaign that she’s created with the help of Fixers.

‘The bullying started around the age of seven. I was victimised because of my weight, my hair and the way I looked,’ explains Eloise.

‘I found a lot of people would stand by and watch the bullying happen. I want people to see my posters, which have a mirror in the middle, so they realise that they can be the person to help.'

Chloe Hine, who set up an anti-bullying charity in response to her own experiences, also appears in the broadcast in support of Eloise’s campaign.

‘I was bullied by a group of girls who name-called over social media and it got to a point where I wanted to end my life,’ Chloe comments.

‘Not many bystanders realise that they are actually part of the problem.

‘More people need to realise that if they speak out, the number of people being bullied will decrease massively.’

Watch Eloise’s TV film at the top of this page.

Speak Out Against Bullying 9th Jul 2014