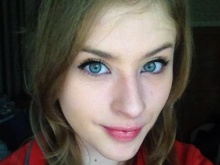 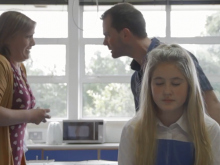 An actor plays a young person affected by domestic abuse 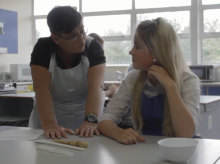 A group from County Antrim are calling on teachers to look out for signs that any of their pupils are experiencing domestic abuse.

Led by Naoise O’Boyle from Randalstown, the team want young people faced with violence at home to receive better support in schools.

‘Domestic violence is something that we know is real and has a long-term and lasting impact on young people,' explains 20-year-old Naoise.

‘Some people we know have experience of it in their family. We thought we needed to do something to help others open up about the issue.

‘Young people should feel safe knowing that if they tell their teachers about their problems, that they will be taken seriously and offered the right help.’

With Fixers, the group have helped produce a film to get their message across.

In the film, the main character’s school life is affected by her experiences at home.

Watch the group’s film ‘Domestic Violence Education’ at the top of this page.

‘The film is brilliant and works really well,' Naoise says.

'It doesn’t scold schools for not being up to speed with how they handle issues such as domestic violence, but rather it highlights the importance of being able to deal with them when they arise.’

The group, who plan to share their film with local schools, launched the resource at an event at Women’s Aid in Antrim.

Retired primary school principal, Winston Pollock, was in the audience.

He commented: ‘Regrettably, the resource that these young people have created remains entirely necessary.

‘Hopefully, this film will act as a gentle reminder to teachers that they entered such a noble profession not to simply pass on information, but because they care for the safe development of pupils too.’

'People in positions of responsibility need to be aware of the signs and the steps they should take to make sure victims feel safe enough to speak out and ultimately break free from the cycle of violence.’

Shanice is helping young people new to relationships recognise
when a partner’s behaviour is abusive. Find out more about her campaign.