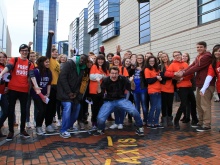 Stephen Sutton and his team at the original Good Gestures Day 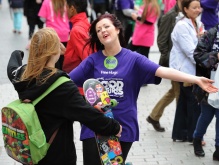 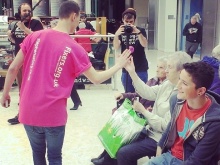 Young people give out free high-fives

After the overwhelming success of last year’s event, National Good Gestures Day is back and it’s set to be bigger than ever.

Young people will descend on town and city centres across the UK on Saturday 16th May between 11am and 3pm to carry on the work of Fixer Stephen Sutton, who wanted to connect with others through random acts of kindness.

Just four days before he died following a battle with cancer, he took part in the 2014 event and expressed his wish for National Good Gestures Day to be rolled out each year.

To fulfil his request, we are recruiting 900 people to take to the streets of the UK to share hugs with passers-by for Stephen on May 16th.

They're joining forces to continue Stephen’s message of spreading positivity and kindness to make people smile.

Fixer Sadie Fox (18) is a friend of Stephen’s who took part in the Liverpool Good Gestures gathering last year.

She says: ‘He was an exceptional person. It was so important to him and it’s nice to carry on what he started.

‘I think he’d be over the moon and really proud that we are doing this.

‘This is our way of dealing with the loss and keeping his memory alive.’

Watch the film from last year's National Good Gestures Day at the top of this page.

Twenty-year-old Alistair Fisher, who led the Swansea event last year, added: ‘Last time was amazing. It was lovely to see so many people smile because of something so simple.

‘Hopefully we can make this year’s event even bigger than before.

‘I would strongly encourage people to come along. At the very least, it will brighten up their day.’

Eighteen-year-old Hannah Telles, who took part in the original Birmingham event in 2013, explains why National Good Gestures Day is so important.

‘Stephen spent the last few months of his life selflessly making others happy,’ she says.

‘We have a duty to continue his fantastic message and remind people that there is good in the world.’

If you are aged 16 or over, you can sign up to share a hug, high five, handshake or fist bump for Stephen around the UK by registering here.

Click here to find out more about National Good Gestures Day 2015 and
hear from some of those already signed up to take part.