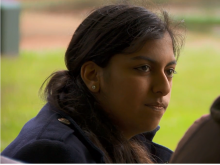 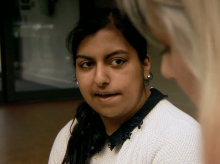 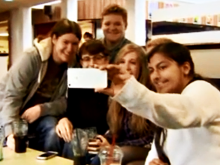 Maria taking selfies with her friends

Knowing what it’s like to live with facial palsy, Maria Munir is raising awareness of the condition while showing others who are affected that they’re not alone.

The 19-year-old from York was born with a blocked nerve in her face, which impacts her ability to smile and fully close one of her eyes.

‘As a child, people would ask “why is your face wonky?” which was often difficult to take,’ explains Maria.

‘We would have school pictures taken and the photographer would tell me to smile more and I just couldn’t do it. It was quite humiliating.

‘Ever since then, I’ve been trying to prove to people that I’m not different and can do the same things they can.

‘I think there definitely needs to be more information available to the public about such conditions.

‘I want people like myself not to see what they’ve been through as a weakness, but as a catalyst to make them stronger.’

With Fixers, Maria has helped create a poster depicting a young woman with facial palsy.

Surrounded by words, which are all symptoms associated with the condition, it seeks to increase people’s understanding of it.

To enlarge Maria’s Fixers poster, click on the image below. 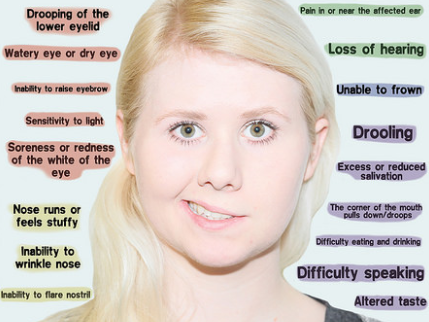 ‘The idea was to show what facial palsy is because many people just don’t know enough about it.

‘If we can tackle the stigma, then others like me will feel less isolated and the condition is less likely to rule their lives.’

Maria intends to display the posters in schools, colleges and doctors’ surgeries around York.

She adds: ‘Working with Fixers has allowed me to make a difference on something that affects me every day.

‘The more we talk about facial palsy, the less ignorance there will be.

‘It will also help those living with it to realise that it doesn’t have to be their identity.’

Maria has also been speaking about her campaign on TV.
Watch her broadcast film.