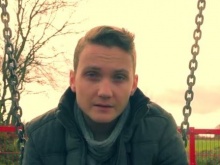 An actor in the film portrays an abuse victim 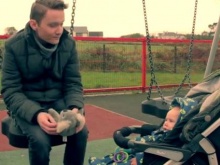 In the film, actors portray father and child 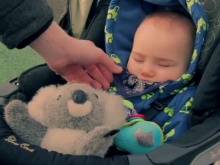 A baby in the Fixers film

After growing up around domestic violence, a young man from Coleraine is helping others with similar experiences to break free from abuse.

‘Adam’, whose real name has not been used, is showing young people from hostile households that witnessing negative behaviour doesn’t have to determine your personality as a future parent.

‘I developed an angry personality and got into a lot of trouble at school,’ explains Adam.

‘The negative parts of my character seemed to be encouraged.

‘School didn’t seem to notice my misbehaviour and they just treated me like I was a troublemaker.’

‘I was scared that I’d continue to turn into the sort of adult that I had witnessed while growing up.

‘The type that is just used to violence against loved ones.’

With the help of Fixers, Adam has produced a short film about the effects of domestic violence.

It shows a young man, played by an actor, assuring his son that he’ll be a better father than his dad was to him.

Watch Adam’s Fixers film ‘Granda’s Eyes’ at the top of this page.

‘I wanted to show that domestic violence isn’t normal, even when it happens so much in your life that it may appear so,’ says Adam.

‘I want to share this film as much as possible via social media and have an event in the local community centre.

‘Hopefully my campaign will make a better life for someone and their family.’

Helping those in an abusive relationship,

Natalie encourages people to speak out.